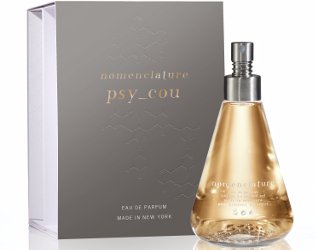 Call it the primal scream of perfumery. Coumarin was the very first molecule that allowed perfumers to cut loose from the past and venture into modern abstraction. First used in the groundbreaking 1882 Fougère Royale, this synthetic marvel ignited a new era of artistic expression. Named after kumarù, the word for the tonka bean tree in Tupi, an Amazonian language, coumarin is not only the primal source of modern perfumery, it is still a primary material in the fragrance industry.

THE SCENT: Primal Modernity
To rebirth coumarin and bring it back to its original modernity in psy_cou, [perfumer] Frank Voelkl had to cure it from its compulsive desire for sugar in order to let its deepest psyche break free. Rather than focusing on its almondy aroma, he drew on the molecule’s true nature: the scent given off by fresh-mown hay. Cool, sparkling juniper berries and cardamom and creamy Palo Santo wood – used as incense in sacred Ecuadorian rituals – shed a ray of light on the bucolic bale. Then flamboyant saffron sets it ablaze, releasing burnt notes of coffee, incense and oud, unleashing psy_cou’s darkest instincts. Like souls, perfumes are made of shadows and light.