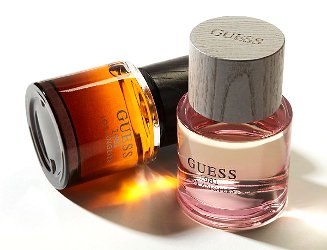 Inspired by the spectacular LA mountain seascape at sunset, GUESS invites you to discover the brand’s heritage with a classic California adventure.

1981 Los Angeles For Women ~ "GUESS 1981 Los Angeles Women is made with a succulent mélange of redcurrant, juicy mandarin and a touch of pear. Sun-drenched jasmine petals, blush peonies and orange flower glisten at the heart of the fragrance, while apricot nectar adds a bit of sweetness to the scent. Vanilla, praline and sensual musk from the base wrap around you cozily, adding to the sophisticated warmth of cedarwood and Ambrox."

1981 Los Angeles For Men ~ "Channeling the modern GUESS man and the dualities of LA, GUESS 1981 Los Angeles Men completes the duo with its fresh, masculine and sexy energy. The textural top notes deliver an aromatic combination of pepper, plum and bergamot, boosted by bracing spearmint and ginger. The warm, woody background adds exciting contrast with its perfectly blended notes of tobacco and amber."