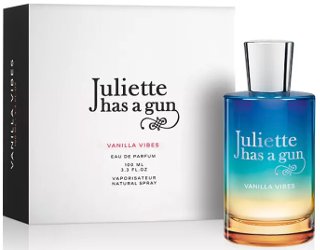 Inspired by the electro and styling of the Burning Man Festival, Vanilla Vibes is the fusion of two opposites: an aphrodisiac natural Vanilla twisted with Sea Salt atmospheric vibes.

"Like the woman embodying the campaign. A futuristic amazon, dancing with the devil, under a vanilla sky in the Californian desert. Possessed by the electro beats, she offers up her silver covered body by the gods of blissfulness. Vanilla Vibes, a hymn to adventure and freedom. Enjoy your trip!" --Romano Ricci

Juliette Has A Gun Vanilla Vibes is available now at Bloomingdales, $135 for 100 ml Eau de Parfum.