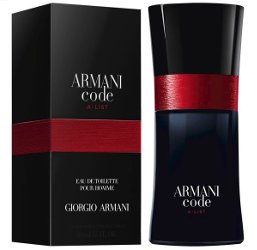 Code A-list fragrance lets you take your place on an exclusive list: the ‘Armani-List’. Your personal invitation to a unique club with an iconic Armani style.

Code A-List is a perfume infused with the seductive notes of the first iconic Armani Code aftershave, yet has been distilled further into a rare blend. Magnifying ingredients, bergamot and green mandarin blend with the smoky tones of Gaïac wood. A tension has been created between lavandin grosso heart and the intensity of Tonka bean. Due to a unique way of extracting, the lavandin grosso heart brings luminosity, opening doors to the exclusive world of Code A-List.

The Code A-List man has a naturally magnetic personality. He seduces with his charming presence and leaves a sensual trail in his wake.