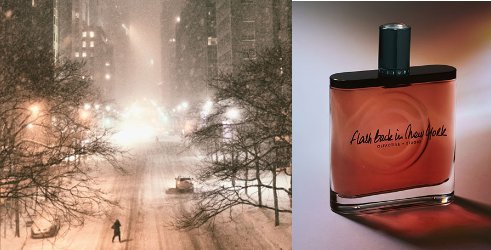 A TRIBUTE TO A CITY THAT STOPS FOR NOTHING, NOT EVEN THE FIERCEST OF BLIZZARDS.

It is in the wake of a snowy avenue, bathed in a warm nocturnal light, an illuminated Chrysler Building just visible in the distance, where Flash Back in New York gets its bearings. Its composition pays perfect tribute to this city that stops for nothing, even the fiercest of blizzards. New York is like fire under ice, and demands a composition fitting its excessiveness, its astonishing possibilities.

The element of surprise is one of the city’s trademarks. At once exuberant and full of contrasts, Flash Back in New York starts with an energetic blend of cumin, saffron, and sage. The first wave of emotion segues into a captivating heart note to the beat of violet and jasmine, and a note of Tuscan leather that lends warmth to the composition. The fragrance swiftly evolves into a slow and graceful movement toward a warm woody and addictive accord of smoked birch, papyrus, and vetiver.

Flash Back in New York was developed by perfumer Jérôme Epinette.

Olfactive Studio Flash Back in New York is available in 50 and 100 ml Eau de Parfum.