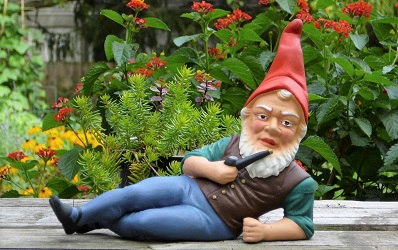 I'm declaring 2018 my "Year of Fun"...in all things — food, travel, clothes, music, movies, books, even perfume. I'm in the mood for smiling, and today's two subjects, I thought, might make me laugh.

Kudos to the inspiration for Fort & Manlé Confessions of a Garden Gnome!1

One does not often consider the humble nobility of the garden gnome, and yet his stoicism in the face of the ever-changing seasons is, in its own way, quite beautiful. Confessions of a Garden Gnome pays tribute to this stalwart steward of your backyard, whisking us through a whimsically enchanting year's worth of weather in a single spray, an experience that proves to be as creative and delightful as any we've had in niche fragrance.

Confessions of a Garden Gnome presents a landscape tour of sprightly aromas: tangy grass, ripe, oily-pored yuzu peels, a fresh-cut bouquet of lily of the valley mixing with mango (it works!) There's also a wake-up accord that reminds me of gasoline and turpentine, maybe wafting from the garden shed? Fun? Check!

Fort & Manlé Confessions of a Garden Gnome Extrait de Parfum is $190 for 50 ml at Luckyscent. 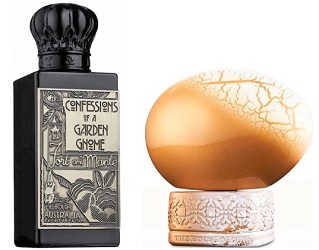 Snow falling in the Sahara? It sounds impossible, and yet once every several decades the residents of Ain Sefra in Algeria awake to the most exceptional of sights- pure white snow resting atop deep burnt-orange dunes and rocky outcrops in one of the world's most arid climates. The majesty of the sight almost defies belief, as if the laws of nature itself have been momentarily suspended to allow something beautiful and beyond comprehension to take place. This is the promise of Wonderly, a fragrance that depicts the hot energy of the desert meeting the purity of snow, where notes of mouthwatering fruit, bone dry incensed woods, silvery florals and enchanting vanillic myrrh weave together in a tapestry of such beautiful contrast that it seems as unlikely as snow falling in the world's hottest desert.

At first, The House of Oud Wonderly2 fits nicely in my 'fun' category. It starts off fruity (a characteristic of many fun scents), and this fruit acts as a glaze drizzled over the scent of fresh shortbread, flavored with almonds and vanilla (there are worse things in perfume life than smelling like a plate of cookies). Too bad the cookie crumbles really quickly — in less than 15 minutes — and all we're left with is the Givaudan aromachemical Cosmone.

Cosmone is a ready-made perfume for lazy perfumers or cheapskate perfume companies. It's STRONG: according to Perfumer's Apprentice and Givaudan, it lasts on a blotter ONE MONTH. It costs about a $1 per ml, and a little bit goes a long way. It's described by Givaudan as ...

...musky, warm, powdery...Cosmone is a very rich, intense and diffusive musky note with warm and powdery facets...reminiscent of Ambregris with sweet aspects of nitromusks. Thanks to its powerful and rich musk character, Cosmone gives an elegant touch to all kinds of accords...in musky, ambery, woody, oriental, chypre and fougere fragrances, but it also adds richness to floral, fruity, citrus and green notes.

In Wonderly, Cosmone (which smells just fine to me, if one-dimensional) rules the composition. Where's the oud? Where's the sandalwood? Where's the incense and iris concrete...sambac jasmine? They must either be present in the smallest amounts possible or they're mirages. Wonderly ain't fun...it smells like a rip-off.

The House of Oud Wonderly Eau de Parfum is $220 for 75 ml, also at Luckyscent.

The quick poll: what are your favorite FUN perfumes?