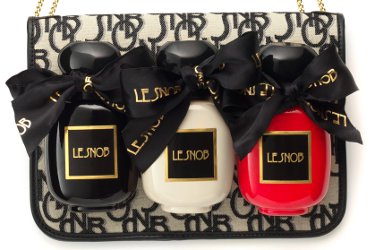 Le Snob No. II (beige bottle; Vintage Rose) ~ "Inspired by the fashionable 1970's when the logo mania was at its apogee. Beige is the color of intrigue. Like a chameleon, she is elegant, eclectic and peculiar. Her bottle is classic, trendsetting beige. The outer packaging is the archetype of the logomania." With rhubarb, bergamot, violet leaf, rose, iris, jasmine, oak moss, vetiver and clearwood.