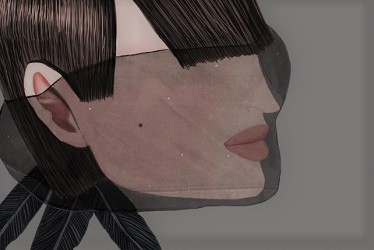 Timothy Han Edition Perfumes The Decay of the Angel1 was inspired by the novel of the same name by Yukio Mishima. It is the fourth novel in Mishima's The Sea of Fertility cycle. In The Decay of the Angel, a wealthy, retired judge, Shigekuni Honda, adopts a handsome (but bad-to-the-bone) teenager, Tōru Yasunaga, who Honda believes is the reincarnation of a friend who died young. Honda wants to save Tōru from an early death — evil, sadness and humiliation ensue.

In college, I fell in love with Japanese Buddhist art. Studying Buddhist sculpture led me to Japanese literature and films. I dutifully paid attention to (read and watched) Mishima and Akira Kurosawa; they were spoken of and written about more than other Japanese writers and filmmakers of their time periods. I appreciated each man's talents, but over the years I came to prefer the writing of Yasunari Kawabata and the films of Yasujirō Ozu, Kenji Mizoguchi and Mikio Naruse (who directed one of Kawabata's best-known works: The Sound of the Mountain). Mishima and Kurosawa left me 'cold,' unmoved. Or to quote Mishima from The Decay of the Angel: "Tōru's pale, finely carved face was like ice. It conveyed no emotion, no affection or tears."2

Still, in preparation for this review I thought I would read The Decay of the Angel. Again, Mishima couldn't make me CARE, but since today's fragrance aims for a hint of angelic/godly decay, what are the signs that an angel is past his prime? According to Timothy Han Edition Perfumes (comments within parentheses are my own):

"The fragrance is based on the 5 stages of a falling angel:

STAGE 4 | Dissatisfaction ("I hate my existence!")

To these I will add: 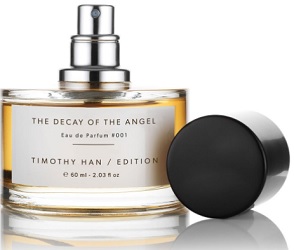 The Decay of the Angel goes on smelling like a cold slice of ham, ready for some good bread, mayo or mustard. There's the haze of a Virginia smokehouse in The Decay of the Angel's opening; then a hearty neroli appears (it seems augmented by menthol or an abundance of pungent citrus peel oil).

The heart of The Decay of the Angel is a muddle, in the best possible sense of that word; I detect incense, cade, syrupy (but indistinct) flower aromas and an accord that reminds me of the scent of ripe quince. As the perfume enters its final stage, an expensive-soap accord develops, with oud and cedar predominant. Patchouli, de-fanged (certainly not 'decayed') rounds out The Decay of the Angel experience.

The Decay of the Angel is O.K., but where's the rot, the sweat, the 'soil' and darkness? Nowhere to be smelled, at least with my nose. BUT: ham is flesh on the verge of decay.

Timothy Han Edition Perfumes The Decay of the Angel Eau de Parfum is available in 60 ml. In the US, you can find it at Luckyscent or Twisted Lily; in the UK at Roullier White.

2. Chapter 3, pg. 3: The Decay of the Angel by Yukio Mishima, Vintage International/Vintage Books, a division of Random House, © 1974 and 2002. Translation by Edward G. Seidenaticker.