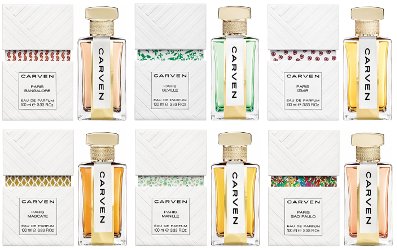 Paris-Bangalore ~ "Paris-Bangalore is a hypnotic dance of clove leaves, a balance of Tolu balm and vanilla and the spell cast by sandalwood, tonka bean and amber."

Paris-Seville ~ "Paris-Seville proudly announces the colour of its scent with notes of bergamot and green mandarin. A flick of the fan releases neroli, virginia creeper and green tea leaves before they dissipate to leave a trail of white wood and musk."

Paris-Izmir ~ "Paris-Izmir is a riot of roses with assertive character and the perfect bridge between East and West. It rises with the freshness of bergamot and freesia notes, sails through the day accompanied by rose and myrrh, and then grows heady at nightfall with sandalwood, patchouli and benzoin."

Paris-Mascate ~ "Paris-Mascate is an oasis that delivers a moment of freshness in the suffocating city. Featuring a hushed breath of bitter orange and coriander, it’s an ode to Moroccan rose spiced with geranium and patchouli and the reassurance of tonka bean, amber and vanilla."

Paris-Manille ~ "Paris-Manille features carambola and pink pepper, the taste of plum and davana – all accented with patchouli and white musk."

Paris-Florence ~ "Paris-Florence greets the nose with a 'ciao' of fresh magnolia flowers accented with blackcurrant. It has the sweetness of heliotrope flowers and the melancholy of sandalwood, Virginia cedarwood and myrrh."