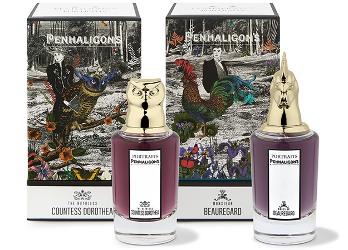 (The Ruthless) Countess Dorothea ~ "A most ferocious matriarch, Countess Dorothea is known for her sharp mind, even sharper wit and a secret fondness for the company of young men, scones and you could call it black-mail. When not holding court, dispensing intergenerational wisdom, checking in on household correspondence or playing cards, she can often be heard observing “How terribly modern.” Indeed, modernity, is nothing if not the most tasteless of crimes." A spicy oriental with bergamot, red ginger, beeswax, clary sage, cinnamon, vanilla, sherry and cashmere woood.

(Monsieur) Beauregard ~ "“Our French friend” is how this unknown but over-familiar houseguest is typically introduced. His lingering gaze lets you know he’ll take things from here. Studiously ignored by the female members of the household - and not only because of the large gifts he receives from Lady Dorothea are a little de trop — he is always where you least expect him, especially first thing in the morning and last thing at night. Thank goodness his monumental beauty and sex-appeal alert you to his presence a long time before he comes into sight. Forewarned is forearmed. Oh and what beautiful arms… " The spicy woody oriental features lemon, pink pepper, cinnamon, orris, benzoin, tonka bean, sandalwood and patchouli.

(The Uncompromising) Sohan ~ "Ambitious and astute Sohan has worked diligently and with flair to establish himself in the world of troublesome affairs. Visionary, some would say right time-right place, nudge-nudge wink-wink don’t mention the Suez Canal, his business relationships have (al)most naturally turned into amicable ties: Lord George and Lady Blanche are always thrilled to welcome a well-travelled guest." A woody chypre with rose, vetiver and oud.

(The Bewitching) Yasmine ~ Sohan's sister. "Quietly charming, Yasmine holds herself with rare beauty. En route to London, her itinerary is resolutely one-way, she has decided to find herself an established man whom she can marry - and enjoy, above all, the kinder British climate. Her conversation-arresting physique and most novel allure does mean the she has one’s attention. (Often when one is male)." With coffee, spices, cardamom, jasmine, incense, vanilla and oud.

(The Remarkable Success of) Mr. Harrod ~ exclusive to Harrods, with a bear head cap and notes of cinnamon bark, oud and cedar. Update: additional notes include plum, raspberry, jasmine and patchouli.

Penhaligon's Countess Dorothea, Monsieur Beauregard, Sohan, Yasmine and Mr. Harrod will be available in 75 ml; look for them in September.