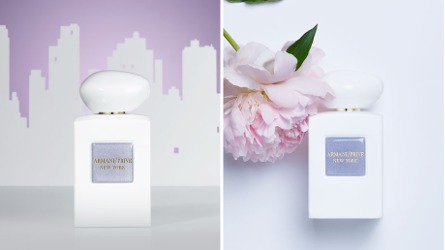 Each new Armani/Privé fragrance is a journey to the heart of the Giorgio Armani universe. An unequivocal balance of perfection, the quintessence of rare and luminous ingredients. A masterly haute parfumerie creation designed to exalt moments of pure emotion. New York is the newest fragrance to enrich the Armani/Privé range. Produced in limited edition and the result of the expert combination of the purest and most noble ingredients, this perfume is dedicated to the city of New York and its fascinating history and culture. It is exclusively distributed by Bergdorf Goodman, an iconic symbol of the city, the venue of luxury par excellence.

Giorgio Armani has a long-standing history with the city of New York. The designer has always drawn on its pervading spirit of freedom and modern vision of luxury. New York, in return, has been unwavering in its praise for the creator and his style, dedicating an Armani Day to him each year on October 24 in recognition of his support to the city's social economy and particularly its schools. And so he named the fragrance simply New York.

New York is a luminous creation. The smooth, white bottle is a reflection of the fragrance, housing a lofty floral heart with a peony accord imagined by talented young perfumer Fanny Bal (IFF). Top notes diffuse with a stream of white pepper, essence of neroli, and aldehydes: an immaculate veil that adds a new facet to Giorgio Armani 's cherished iris, which is joined at the heart by a peony powdered with ambrette and white tea. The scent becomes addictive as the white musks unfurl, blended with frankincense, vanilla, and cashmeran. Light, sensuality, and enveloping softness: the fragrance New York is a mirror of the American city, feminine and sophisticated, imbued with a spirit of freedom.