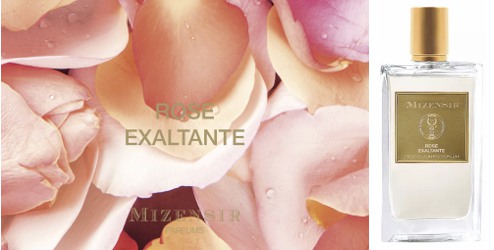 Bois Iridescent ~ 2016; woody floral. "What a strange name ! Iridescent as in irised… rainbow ? This is where the magic stands, a mystery which tells in two words a perfumer’s enthrallment for wood. Here, Alberto Morillas turns it into “floral wood”, transfixed by rays of colours, with bergamot essence and mandarin oil bringing brightness in, and Paradisone® its crystal-clear freshness. The combination of violet leaf and Iris absolute creates a powdery and floral touch; it forms the perfume’s heart which then unveils woody and sandalwood notes to eventually end with Cetalox® amber-musky hint. Bois iridescent is a very singular perfume, enhancing wood to take us far far away…"

Elixir de Musc ~ 2017; woody musk. "This is the perfume for a skin that sleeps under the sun. When just about to shut your eyes, a soft heat soothes both mind and body before they give way to sleep. Elixir de Musc, the aptly named! Alberto Morillas wanted it as condensed as an elixir and filled with all the powdery musks, so swathing that one dreams to be wrapped in it. To further intensify the feeling, Elixir de Musc has no head note. This perfume should be worn like a second skin, beaming and warm, enriched with a heart of Iris concrete® intensely powdered, strong and powerful musks like the Muscenone®, habanolide and amber wood, quivering like Limbanol®. Elixir de Musk is not a perfume, it’s a hot and musky cocoon."

Original Oud ~ 2016; woody leather. "Chinese portrait: If I were a country ? I would be Laos, in a deep forest with only a few rays of light breaking through it. If I were a scent? I would be wood meets musky leather. If I were a thing? I would be a chessboard, because, in Original Oud, the vigorous white wood contrasts with the dark and velvety gurjum balsam… like cocoa powder! If I were some raw material? I would be wood leather, which was born in Firmenich lab! Rare and unprecedented, it contains the entire spirit of Laotian oud wood. If I were a spice? I would be the green cardamom to bring intensity and a puff of hot! If I were a flower ? I would be two ! The iris and the geranium for ultimate elegance. But Alberto Morillas will have the final word… « This perfume, entirely built around wood leather, is like dream oud wood; I have put all the power and mystery of this essence in it, which has long been fascinating me.”"

Rose Exaltante (shown) ~ 2016; floral. “We don’t know each other yet, but I know you won’t be able to live without me from now on. I am going to be your new obsession. You won’t see me coming and first, will only perceive my delicate Bulgarian rose whiff. Then, the pink pepper and the chamomile blue will come along and subtly inebriate your senses with their spicy scent. Some say they surrendered at that very moment, totally taken by those spices to which I have added just enough of styrax and oud wood, to make it more sleek and graceful. I am not like other roses. You can’t pick me. You can not catch me. I am the one who comes to you. My scent is as powerful as woods and salves and hides the musk sensuality which quivers underneath the skin.”

Tender Oud ~ 2017; spicy woods. "A night in the Sahara Desert Even if the sun has now gone down, the sand is still warm. Slowly, it’s cooling down, caught up by an upcoming fresh night. The camp is being set up while tea and dates are brought to the table. In the distance, one can see an oasis or a mirage… or maybe is it just the dream of a perfumer? Tender Oud is the story of a dreamed Orient: Alberto Morillas has created the scent of sand, stretching as far as the eye can see and gathering all the scents of those who have trampled it. The smell of spice caravans or of saffron and pepper is as precious as gold or the dark tanned leather of the merchants’ trunks, where the fabrics from the Silk Road are kept. Tender Oud bears the sand dry minerality, sometimes hot, sometimes freezing, depending on the hours of the day or night. It also hides spicy, woody and smoky traces, like the ones left by some travellers and other adventurers."

Tres Chere ~ 2017; floriental. "The letter « Dear Stranger, This letter might never reach you even though this is for you, just like this perfume. Our eyes have only met once but I feel like I have always known you. We were on the Paris-Venice train, that day when the train stopped in the middle of nowhere at night. You were leaving when I was just coming in for dinner. You brushed past me, I looked at you. You said “Sorry!” My eyes stared at you, your profile, your eyelashes curves, the hem of your lips. One second which will last for eternity. One second, just enough time to create this perfume. It tells the story of this moment which has made such an impression on me. Everything was there. The sweetness of your voice, your gestures grace, which the musk roundness and the sandalwood and vanilla mellowness, seize so well here. Your silhouette outlined by the light, I see it as graceful as a white flower. I looked for you for a long time, I would have loved to see you again. I am catching the train back tonight. I will keep these words to myself. And this perfume too. Alberto Morillas»"