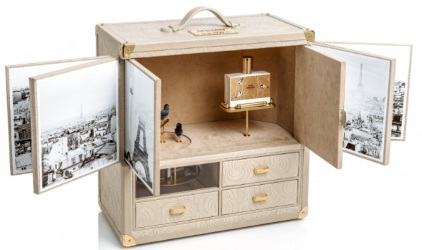 Memo celebrates its 10th anniversary with a limited edition music box displaying a bottle of Eau de Memo: "A trunk of secrets, a whisper of leather. Frivolous treasures tucked away in curious drawers. A flash of blue feathers, a forgotten melody. Flapping wings over the rooftops of Paris. A bottle, as if in flight, kept away from prying eyes. Cloaked in embossed beige leather, this music box commemorating the 10th anniversary of Memo Paris houses a bottle of Eau de Memo alongside singing automated birds. Reuge, the Swiss watchmaking specialist, is the skilled manufacturer behind this limited-edition gem with a visible automatic movement that transforms the music box into a genuine treasure chest." Special order, requiring 3 months lead time, price (blissfully) unknown.