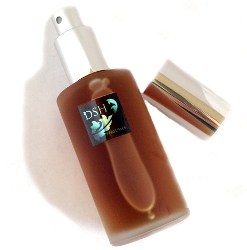 Foxy ~ "A new unisex, animalic fragrance with many inspirations. First, is to portray and speak to another “classical” animal note, this time ambergris / amber, which I felt evoked the color of the red fox perfectly, and to create a slightly more rough and feral fur accord than I had in the past few animalic releases. The second source came from watching Wes Anderson’s portrayal of Roald Dahl’s “Fantastic Mr. Fox”. I used some of the fabulous details found in the movie in the design of Foxy and I think that they work well in telling the story of the smart, sexy, creative, wild animals that foxes are. And stylish… always, intelligent and stylish. The very top note is of the ‘golden star apple” / apple whiskey that Farmer Bean basically lives off of; with the next in the line up as Mrs. Bean’s “famous apple ginger snap”, which gives a wonderfully playful introduction to what becomes a much more sophisticated fragrance as it develops."

Become the Shaman ~ "Become the Shaman draws from the animist / nature-based spiritual traditions of native peoples of the Americas. Palo Santo (“Holy Wood”) is the focal note for the design and is used by the Incas to purify and cleanse the spirit from negative energies. White Sagebrush and Tobacco (used by Native Americans to cleanse and purify) as well as Copal resin (used by the Aztecs for magic and as a symbol of immortality during funerary ritual) are also called on to imbue the design with richness and protection. I developed a milkweed accord to symbolize ‘transformation’, as it is a native plant to the New World and is the exclusive food of the migrating Monarch Butterfly. Become the Shaman was inspired by the “Project Talisman / Eau de Protection” project launched at CaFleureBon.com to commemorate it’s Seventh Anniversary."

Dawn Spencer Hurwitz Foxy and Become the Shaman are available in a variety of sizes and formats, for more information see the website.