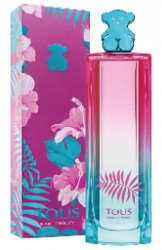 The perfect mix between French chic and the essence of the Cuban Caribbean. With just a few drops of Bonjour, sunglasses, fresh looks and summery hats, it already feels like a vacation.