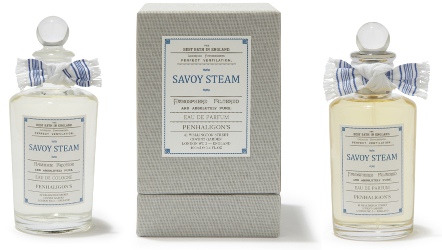 Penhaligon’s will launch Savoy Steam, a new unisex fragrance, in March. Like the now discontinued fragrance Elixir, Savoy Steam was inspired by the brand's first scent, Hammam Bouquet. Hammam Bouquet was introduced 1872 in honor of the Turkish baths next door to the original Penhaligon's barber shop on Jermyn Street in London.

But what moved [barber William Penhaligon] the most were the infusions. The London and Provincial Turkish Bath Co. was modern, most exotic. And in the very same building. You see as he whistled and lathered and made polite conversation, the vapours from the esteemed building downstairs slid under the door. Day after day they inspired and relaxed him. They became a part of his existence until this inspiration spilled into something that still TODAY brings us joy….

Savoy Steam will be available in two concentrations, both developed by perfumer Juliette Karagueuzoglou.