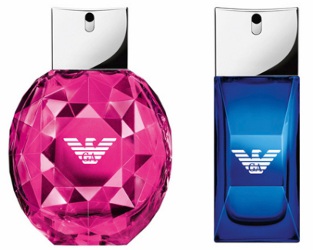 Emporio Armani Diamonds Club ~ "Light up the night with the Emporio Armani Diamonds Club Eau de Toilette, a vivid and passionate fragrance that refuses to go unnoticed. This limited edition floral fruity chypre fragrance for women pulsates with positive energy and a free spirit. Its bright, fun-filled character meets with deep sensuality as the fragrance develops, stealing hearts and leaving a lasting impression as night turns into morning. Diamonds Club perfume opens with the mouthwatering freshness of mandarin with a refreshing aquatic accord, before a deeply feminine heart of rose essence unveils hidden depths. A chypre base of patchouli sounds off the fragrance with dark seduction."

Emporio Armani Diamonds Club for Him ~ "Lose yourself to the beat of the Emporio Armani Diamonds Club for Him Eau de Toilette, a fragrance that captures the energy of a night out. This limited edition fragrance for men is as hypnotic as the thundering base of the club, capturing the passion and energy of pressed bodies, pulsing lights and entrancing music. As the night goes on, his fragrance becomes more intense, and even more captivating, stealing hearts as he makes his way through the crowd. Diamonds Club for Him aftershave opens with a shiver of cool cardamom at the opening, before being lifted with an energetic heart of aromatic lavender and marine notes. In the base, the warm and enticing tones of geranium ensure a lasting impression."