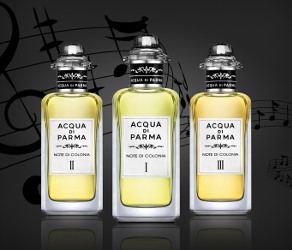 1916 – 2016. Acqua di Parma has reached its first centenary. Its origins are inextricably linked to the city of Parma, where Colonia, the fragrance which marked its debut, was born and where the brand has been cultivating the values of art, music and elegance from birth. To celebrate the Centenary and pay homage to its city and its heritage, Acqua di Parma is creating Note di Colonia. A new Collection which finds inspiration from the world of opera. Three different fragrances, each packaged contained in a reinterpretation of Colonia’s first bottle.

Note di Colonia I ~ "an intoxicating crescendo featuring light and captivating notes, releasing a sensation of joy. Note di Colonia I is inspired by Libiamo ne lieti calico, from La Traviata by Giuseppe Verdi. Its vibrant composition emits an atmosphere that is joyful and full of vivacity. Its strong characteristic cologne flows in a strictly modern orchestration given by its aromatic notes. The fragrance features an explosion of bergamot, in its sparkling and most prized Italian quality, as well as the bright notes of neroli. The citrus start, classically cologne, sweetens and becomes soft and embracing as it encounters the heart of the fragrance, which is unexpectedly aromatic. Here, the composition fuses the freshness of lavender with the velvety warmth of Damascus rose and violet accord. In the rich and sumptuous finale there is a refined combination of patchouli and cedarwood. Precious essences which give the fragrance a satisfying depth and refinement, making it absolutely unique."

Note di Colonia II ~ "an intense prelude with the certainty of victory in the soul inspired by “Nessun dorma,” Turandot. Note di Colonia II is a homage to Puccini’s art and to this true masterpiece. A fragrance which knows how to modulate the inner nuances of a wait which precedes the rising of the new day. The fragrance features top notes of citrus opening with radiant notes of bergamot, orange and grapefruit. The olfactory rhythm is ever more sustained and strong with vibrant notes of basil and cardamom. And whilst the chill and the solitude of the night begin to lessen in the first warmth of the rising sun, the extraordinarily soft and engaging tones of sandalwood arrive united with the smoky grey tones of gaiac, giving a comforting sensation of consistency and depth to the heart of the composition. Emotions which are enriched in the velvet base by new undertones, with the refined encounter of musk and vetiver."

Note di Colonia III ~ "a magnificent musical score. The fragrance draws inspiration from The “Marcia Trionfale” in Aida where Giuseppe Verdi puts his theatrical capabilities to the test. In this opera, more than any other, the maestro makes a masterful and innovative use of the orchestra. It is the wind instruments which create that triumphal atmosphere to communicate victory and heroism. Note di Colonia III, with its majestic and triumphant notes, glorifies one of the most famous pages of Italian opera. Top notes include the glorious and vibrant accord of mandarin and ginger conquering straight away with its vigor. The notes are enriched in the heart with touches of vetiver which finds a deep counterpoint to its dry and woody accents in the warm and resinous note of olibanum brightened by jasmine. A powerful and melodious orchestration which strides majestically. In its final part, the fragrance transmits a sense of eternity, with the refined notes of tonk a bean which meet the intense and full-bodied ones of ciste labdanum and myrrh."