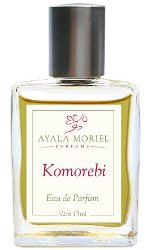 Indie natural perfumer Ayala Moriel has launched Komorebi, a new natural fragrance "that captures the wonderful scent that can be experienced in late summer and early autumn in the Pacific northwest rainforests."

If the word "Petrichor" describes the smell of the parched earth after the rain; this perfume captures the opposite - the scent of the forest floor after its been kissed by sun. It's the Pacific Northwest equivalent of the Meditteranean garrigue (the intoxicating odour of sunbaked earth and scrubland, dominated by sage and labdanum), and in my mind I've been describing it as "Forest Amber" or "Pacific Chypre". But non of these names seemed to capture the magic quite as perfectly. So I've reached out to the Japanese language, which has a special word for the interplay of light and leaves, which includes the sunbeams one would observe coming through the trees and shedding light on the vapour they exhale; as well as the dappled-gold forest floor, a vision that is shifting yet constant, as long as the sun is there. This is the essence of komorebi in the Pacific rainforest. This perfume is the first in a series of perfumes dedicated to special places in the Pacific Northwest. [sic]