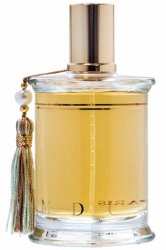 The name “Les Indes Galantes” which translates as “The Amorous Indies” is drawn from a so-called Ballet héroïque, an opera ballet by the 18th century French musician Jean-François Rameau.

This fragrance represents the second stage in a long olfactory journey across the globe, that began in Japan with the fragrance Cio Cio San...

[...] A wealth of exciting and exotic notes accompany us on our travels, where sun-drenched Mediterranean bergamot contrasts with the spicy accents of Persian cinnamon and a rich note of Vanilla from the Americas vies with the masculine and characteristic smell of leather.

Parfums MDCI Les Indes Galantes can be found now at First in Fragrance in Germany, in 75 ml Eau de Parfum for €225.