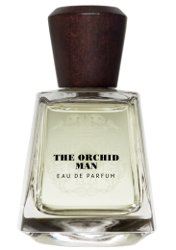 Boxing, like perfume, is about facing yourself. An encounter of rituals and studied gestures. It is also a moment of violence that must be elegant. Governed by precise rules and respect for the opponent, boxing became a gentleman’s sport at the end of the 19th century.

David Frossard [founder of Frapin, Liquides Imaginaires and Différentes Latitudes], an expert of the boxing world, took all of this into consideration when he launched the idea for a fresh, elegant, powerful and virile perfume. [Perfumer] Jérôme Epinette, whom he met several years earlier, has been entrusted with the interpretation of this world which is both animal and cerebral.

Frapin The Orchid Man will be available in 100 ml Eau de Parfum.

* "Nicknamed the “Orchid Man” for the corsages he often wore with his tailored suits", according to the Smithsonian.