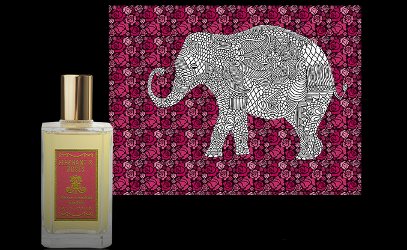 Elephant & Roses A late afternoon, sitting at my desk, exercising to recreate an elephant smell, while writing my perfume formulae I had a kind of a vision, which merged the elephant’s image, its smell and a large field of roses, of an intense colour, almost fuchsia. Within this vision the elephants were running and, trampling on the roses, were dispersing a scent of flowers, mixed together with the strong smell of their bodies. Slowly - while I was weighing and smelling my formula - after trying it on my skin I realised that it was mine. I used the Turkish rose: this fragrance is derived from the blending of two different formulae, using the so called “dans le tiroir” method, by which I merged animal notes with skin and floral ones.

Name’s origin : The elephant comes from a remembrance of Indian and African colonies, and the rose is the British rose. An encounter between an elephant and the roses has got some British sense of humour. There is an assonance with London district Elephant & Castle.