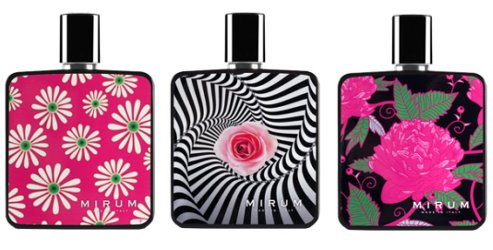 Mirum Parfums is a new Italian niche line debuting with four fragrances inspired by the 1970 Isle of Wight Festival.

Flower power, hippie style, free love and uncensored thought will mark these years of change, and MIRUM has extracted fragrances from those, giving you the chance to live again the same emotions through its perfumes.

Jimi (above left) ~ "In the romantic initial notes, shyness has the upper hand and it is hard to recognize the faint blend of rose, bergamot and verdello. Then, the notes of the heart come to life, strong and powerful. Leather, cedar, sandalwood and vetiver celebrate Jicky’s virility, while the intoxicating jasmine reveals the seductive femininity of Michelle. We could not miss patchouli at the tail end of the essence, since it is the essence more than anything else that accompanies the revolutionary spirit of the Beat Generation. Amber of Arabia, oak moss and tonka bean, complete the blend giving character and sensuality."

Make Love No War (above center) ~ "The revolutionary spirit of the Beat Generation was expressed through the ideas and was inspired by the sentimental memory of the existence and the pursuit of universal love. Its odour belongs to childhood memories. It is atavistic. It is clear. It is persistent. It is indisputably critical. Slim and stylish, it smells like soft rose. And for her, the queen of flowers, it was unimaginable not to sign the essence. Present in the head notes, with bergamot and iris, it is also in the notes of the heart and, in combination with Indian sandalwood and Mother island’s vanilla, shown fair and sincere. In the final notes, patchouli, Virginian cedar wood and Arabian amber offer tenderness to the scent. A special softness, like a kiss: Make love, not war."

Warm Thrill (above right) ~ "“Happiness is a warm thrill” was sung by the children of the Beat Generation on the Isle of Wight. The festival, which took place in 1970 was madness. The air smelled mystical, intense, primordial, full of goodness. It was the scent of happiness: Warm Thrill In the formulation of the initial notes of the verbena, neroli and lime fragrance celebrate the euphoria of the participants, when the guitar jacks were switched on. In six hundred thousand they felt a shiver run over their skin. Jasmine and tuberose sign the notes of the heart and identify the personality of the perfume. Incense, meanwhile, reveals the mystical vocation. The softness of cedarwood and rose combined with the purity of white musk bring back spirituality, stating the desire for freedom sought after by young people of the Beat Generation."

Not for Sale (not shown) ~ "“Not for sale” the pop star repeated to that the journalist that was interviewing him. The woman symbol of the civil rights campaigns, standard bearer of the ideals of peace and universal love released the interview, sitting at a coffee table next to Giorgio and Jicky. They did not believe their eyes, nor their ears, let alone could they trust their sense of smell which perceived an admirable enactment. The opening notes of the perfume composed of ozone, bergamot and lavender, gave a feeling of honesty. Then, when it unveiled the notes of the heart, he took the shape of astonishment. An blend of cedarwood, vetiver and cloves conveyed a unequivocal sense of moral integrity. Finally, in the tail notes, white musk, oak moss and vanilla bourbon revealed the proud character of a woman. The icon of the Beat Generation said goodbye to them, before leaving. The two boys were incredulous, speechless. Around them, the only witness of the incredible encounter, was a perfume: Not for Sale, the essence of dignity."

Mirum Parfums Jimi, Make Love No War, Warm Thrill and Not for Sale are available in 100 ml Eau de Parfum, €140 each at Vittoria Profumi in Italy.