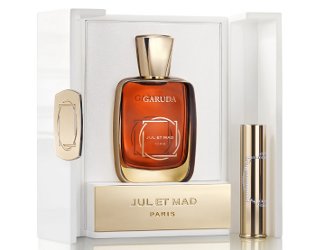 Nin-Shar ~ "Babylon and its splendid Hanging Gardens, one of the Seven Wonders of the Ancient World. Nin-Shar, "the lady of the gardens". In Sumerian mythology, Nin-Shar is the Goddess of Plants. She is the daughter of Ninhursag, Goddess of Fertility, and Enki, God of the Waters." With bergamot, davana, rose, jasmine, patchouli, oud, benzoin, vanilla, cedar, sandalwood and incense.

Garuda ~ "Garuda is a protective divinity, portrayed as part man and part bird in Khmer mythology. He is the lord of birds, an allegorical figure of Indian inspiration. Thousands of Garuda depictions decorate the bas-reliefs of the magnificent Angkor Watt, the divinity usually being shown as the battle steed of Vishnu or Krishna, bearing the god on his shoulders, while fighting against the god's enemies." With bergamot, orange, cumin, pink pepper, oud, saffron, rum, patchouli, timbersilk, vetiver, cedar, cashmeran, amber, vanilla and musk.

Update: The luxury coffret (shown above, with gold-plated flacon and gold nomad spray engraved with crystals, in a white lacquer case) will be $530 (€485); the "Love Basics” bottle (golden cap and front decoration, in a white and gold carton) will be $190 (€165).