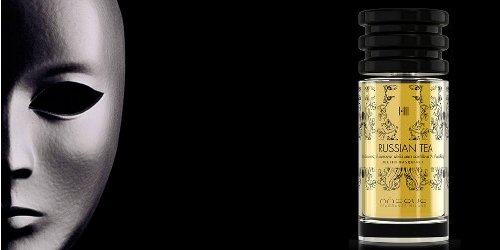 There’s a kind of fragrance that especially intrigues me: it’s the type that reads as warm and cool at the same time. This kind of fragrance’s notes are warm — leather, spices, wood, for instance — but its overall feeling is thin and cool, like a splash of scented water. Masque Milano Russian Tea is that sort of fragrance.

Russian Tea kicks off with an intriguing blend of fresh mint and pepper with a quick animalic tingle like a passing whiff of body odor. These notes don’t stand alone, though. They’re infused with rich birch tar and leather mixed with tea — the notes of Russian Tea’s spine. At this point, the fragrance smells like an oiled motorcycle boot that’s tromped through a mint patch.

Immortelle’s curry-like scent and dank incense creep into the composition over the next quarter hour. Although these are robust notes that can dominate a scent, they’ve met their match in Russian Tea’s leather and tea one-two punch. They do rise to the top, though, as the leather starts to fade, a good hour into the fragrance’s wear.

When Russian Tea reaches cruising altitude — at least an hour from first spritz — it retreats into a quieter waft of immortelle, incense, and tannic black tea with a smoky, leathery feel, rather than blatant leather notes. Russian Tea doesn’t pack the spicy, cinnamon and clove notes that some tea scents, do. Instead, immortelle provides a touch of sweetness and character to cut the oily smoke. At its most genteel, Russian Tea reminds me of drinking Lapsang Souchong in a leather club chair with the smell of the high desert evening through the window.

For all Russian Tea’s thick notes and sturdy sillage, the fragrance feels cool and thin, almost cologne-like. It lasts a solid four hours on my skin and is easy to wear as long as you welcome smoky notes. For me, Duel fits this slot in my perfume collection, and its quieter presence suits me better. But if you daydream about Russian highlanders (is there such a thing?) galloping through the steppe to settle by a campfire, you’ll want to give Russian Tea a try.

Masque Milano Russian Tea Eau de Parfum is $215 for 100 ml. For information on where to buy it, see Masque Milano under Perfume Houses.