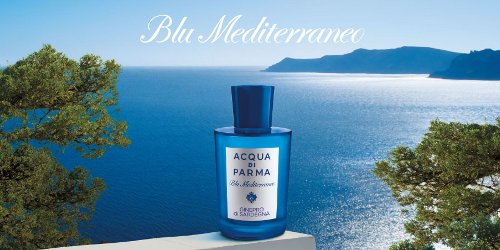 Yes, this will be a review of Acqua di Parma Blu Mediterraneo Ginepro di Sardegna (Juniper of Sardinia). But first, let’s talk about cologne.

What do you think of when you envision cologne? To me, a true Eau de Cologne is a revivifying splash of fragrance that wakes up you then fades away. I want a cologne to apply to my temples if I’m feeling faint, like in old novels, and to freshen me up when the world wears thick and dirty.

What I don’t want is a substitute for a perfume. To me, a cologne shouldn’t bill itself as a quick reviver, only to stick around for hours with a thick residue of citrus and resin. To me, that’s simply a mislabeled perfume. I don’t want to smell someone at the office who meant to have simply freshened up with a fragrance after his shower, but who trails the scent like a bad furniture polish for most of the day. For that reason, I’ve had trouble falling in with a number of the “eaux” on the market. If a scent is truly an Eau de Cologne in the classic sense, I want it to refresh and disappear. Otherwise, it becomes — for me, at least — a uniquely obnoxious perfume.

And now we come to Acqua di Parma Blu Mediterraneo Ginepro di Sardegna. The “Blu Mediterraneo” line is a subset of Acqua di Parma meant to signal the “hedonistic” Italian lifestyle. Ginepro di Sardegna’s notes include bergamot, pepper, allspice, nutmeg, juniper, sage, cypress and Virginia cedar. Since this is “Acqua” di Parma, and since the notes are cologne-ish, I expect a brisk, refreshing scent.

Does it satisfy? Yes and no. Yes, Ginepro di Sardegna is brisk and clean — at least, to begin with. As advertised, it kicks off with a slap of bergamot and pepper on a raft of crushed cypress greens. It projects crisp, acidic freshness.

But on Ginepro di Sardegna's heels comes an amber-y, spicy body characteristic of a classic oriental. A cut of cedar, resin, and lingering citrus keeps it from plunging into, say, the territory of a big 1980s oriental. But the overall food-spicy feel is there, and it sweetens further with wood and amber. Most of all, the fragrance sticks around. Although Ginepro di Sardegna is an Eau de Toilette, it behaves like a robust Eau de Parfum and broadcasts a respectable sillage through a full morning or afternoon. After an hour or so, the fragrance is musky and sweet, and any pretensions toward “fresh” are gone.

If “fresh” is what you love, and you rejoice in the thought of a fragrance that sounds like a cologne but behaves like a perfume, then you may want to give Ginepro di Sardegna a try. Especially if you yearn for a warm, amber-y woody base with a touch of spice that still tingles a bit. Ginepro di Sardegna bills itself as unisex, but I’d say it skews masculine.

If you, like me, want a cologne to show up, refresh, then disappear, you’ll be disappointed. For that, I turn to my chilled bottle of Revlon Jean Naté in the refrigerator.

What about you? How do you feel about cologne? Do you have a cologne that fits the bill of the traditional Eau de Cologne?