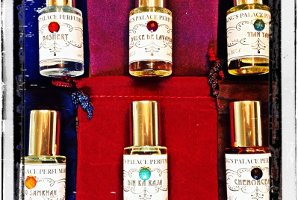 The brand tells the stories of Dr. M. E. Harrison of Riverview, fictitiously appointed to a benevolent King’s court as Royal Palace Perfumer. The products represent – with both humor and nostalgia – memories, emotions and aromas associated with palaces visited by the real Dr. Harrison, a former university professor and journalist. As such, each product offers its own legend – sometimes based on true events but always exaggerated – related to historical fragrances, palaces, and court perfumers from around the world.

Chenonceau ~ "...a gourmand, unisex blend of vanilla, chocolate, and ambery musks inspired by the infamous castle on the water in France’s Loire Valley....The scene of lavish parties featuring the likes of Voltaire, one can only imagine the scintillating pleasures that awaited guests in the ballrooms…and the bedrooms. The scent opens with a buttery vanilla while chocolate is used as a powdery accent to the amber and musks that comprise the body of Chenonceau."

Tian Tan ~ "Tian Tan was inspired by Beijing’s Temple of Heaven, frequented by the Ming and Qing emperors, and honors the tradition of rock and water gardens in private residences. Tian Tan, composed of a symbolic 9 notes, opens with an intoxicating lotus bouquet consisting of four different lotus blossoms (pink, white, blue and yellow); as is often the case with pink lotus, a dry pepper echoes throughout the first moments. A hypnotic blend of white, green, house floral blend, and solar musk accords slowly emerge from the base after the floral tones bloom."

Bashert ~ "...a spicy rose and cinnamon blend inspired by a traditional Judaic food, charoset...Charoset is a chopped salad of apples, red wine, cinnamon, walnuts, raisins, honey and brown sugar...King’s Palace Perfumery’s interpretation focuses on the raisin, red wine and cinnamon aspects of this treat by emphasizing sweeter, fresher rose notes paired with the tang of pomegranates and apples. A blend of cinnamon and traditional Eastern spices add an earthy, almost clay-like dimension to the fragrance while a white musk softens the typical sharpness of rose. For both rose-lovers and rose-haters alike."

Chang Samkhan ~ "The scent opens with a tangy lemon and neroli burst that soon relaxes to reveal the tender sandalwood and orange blossom heart. As the citrusy topnotes fade, the musks emerge at first dewy green and later softly floral. Chang Samkhan dries down to a “your skin but better” aroma."

Natsukashii ~ "...a woody floral inspired by a stroll down a rain-kissed, Kansai street. The summer perfumes of peony and osmanthus blooms meet the soapy sento steam while wafts of ginger and matcha from the kitchen marry the spiraling tendrils of cedar and sandalwood incense from the corner butsudan."

Copal Carlota ~ "...inspired by the story of a European princess turned Mexican Empress...Copal Carlota brings together two worlds of perfumery: ancient tree and spice resins from the Aztecs are blended with Indian, Middle Eastern, and European pefume materials. A rich, peppery, and smoky amber aroma, this one is unique in that it focuses on Mexican Copal incense."

Mansa ~ "...a stunning, retro take on Rosewood blending citrus, spices and other precious woods. Mansa, which translates to “King of Kings” in Mandinka (Mali), was inspired by King Musa I, now deemed to have been the wealthiest man in history with an empire that stretched across the African continent...Mansa opens with bright citrus and leather (vegan); as the woods slowly emerge, rosewood takes center stage accented by saffron and moss."

Din Ka Raja ~ "Din Ka Raja honors the national flower of Pakistan, the cestrum diurnum or day jessamine by pairing three different jasmines and a gardenia note with a musky, white chocolate base. No ordinary jasmine, this is suitable for both men and women as the drydown is a modern gourmand that recalls the peeling back of a cupcake wrapper. Din Ka Raja is also the first King’s Palace Perfumery aroma to feature a house blend, shimmering musk accord comprised of over fifty different notes."

Dulce de Lavanda ~ "...inspired by a lavender caramel candy from Andalucia...Dulce de Lavanda opens with a tang of orange and apple and a whoosh of mint (from the lavender). As the fragrance develops, the caramel becomes more apparent and the vanilla and musks compliment the earthier aspects of lavender."

Hampton Courting ~ "...inspired by romantic gardens of the English Palace called home to such Royals as Elizabeth I and her father, the infamous Henry VIII...Hampton Courting is a surprising floral gourmand that opens with sweet orange, melissa, and aldehydes, creating a pineapple effect. The aroma then opens its dewy heart of honeysuckle and rose as the musk and cacao powder lead to the drydown."

The King's Palace Perfumery fragrances can be purchased at the brand's Etsy shop, in Perfume Oil in a variety of formats and prices, including a discovery set of all 12 scents.

*Some of you may remember that Marlen used to write for Now Smell This; his current site is The Perfume Critic.