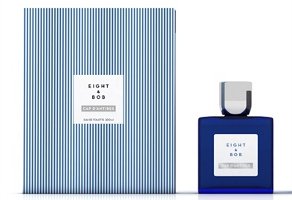 For Albert Fouquet, the creator of Eight&Bob, Antibes was heaven. In this charming village on the French Riviera, Albert enjoyed long holidays during the 1930s in the company of the elite of European aristocracy – holidays that extended from spring until the last days of summer. A few years later the French Riviera was also the place where happened the special encounter between Albert and John Kennedy and that lead to the future legend of the brand. The perfume is the embodiment of unforgettable mornings that were spent sailing in the Grande Bleue, golden sunsets were enjoyed from the gardens of the Eden Roc hotel, and balmy evenings were enlivened with exclusive celebrations and charming parties.

Albert dreamt about these summers during the cold Parisian winters. Like any artist who strives for perfection, he spent many weeks delicately crafting a fragrance that captured the essence of his memories of those summer days. The result was CAP D’ANTIBES. A fragrance that was made for the exclusive enjoyment of its creator and became a favourite in his private collection and a special unwritten story of his memories. Extremely enveloping, sophisticated fragrance. Captivating woody fourgere [sic] aroma. Cap d’Antibes is addictive and has natural top notes such as mint, violet leaves and birch that have been strengthened by vibrant spices like cinnamon, the sensuality of the moss and aromatic, green notes at the heart. The elegance of wood introduces the base notes: the warm presence of the cedar along with the incense and vanilla contribute to serenity, the typical sensation of someone feeling on holiday.