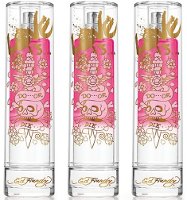 Surprising. Spirited. Uninhibited. The irresistible attraction between the airy lightness of fresh fruits and flowers and the earthbound essence of mysterious musk swirls together in a seamless fragrance embrace.

Update: the notes feature apple, blackberry, bergamot, jasmine, freesia, raspberry blossom, vanilla and blackberry musk. Like the men's version, Love Is... is advertised as the only "shake and spray" fragrance.