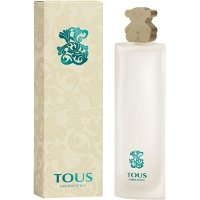 Tous Garden Edition is available in 90 ml Eau de Toilette, and can be found at Bodybell in Spain.