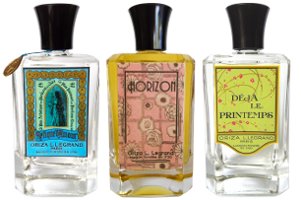 Niche line Oriza L. Legrand was resurrected in 2012; the line's origins are complicated but date back to either 1720 and Jean-Louis Fargeon (the subject of The Scented Palace), or 1811, when Louis Legrand purchased formulas from Fargeon's descendents, or later in the 19th century when Antonin Raynaud bought the house from Legrand and renamed it Oriza L Legrand. Regardless, someone has bought the name and they've now got 7 fragrances and another on the way: Chypre Mousse, Oeillet Louis XV, Rêve d'Ossian, Relique d’Amour, Jardins d'Armide, Horizon, Déjà le Printemps and Foin Fraîchement Coupé.

Chypre Mousse ~ "After the first rainfall in September nature exude scents of humus, peat and wetland. This is the time for a promenade in the woods to enjoy the freshness after the heat of summer. Autumn encourages us to contemplate, to observate nature that gently prepares us for the coming winter and its frostbite. The mossy paths, precious jewels of the undergrowth, are brightened by the last rays of sun...Chypre-Mousse, a Fragrance of the House Oriza L. Legrand launched in 1914 for the dandies of this world!" With mint, clary sage, fennel, green shoots, oakmoss, galbanum, angelica, fern, wild clover, mastic, violet leaves, vetiver, pine, mushroom, roasted chestnut, leather, labdanum and balms.

Oeillet Louis XV ~ "Powdery and peppery, silky and spicy, Oeillet Louis XV soothes yet confuses with its paradoxes. Reminiscences of an ancient time, powder fades and gives way to spicy notes of clove. Oeillet Blanc is homage to the beloved French King Louis XV who saw Oriza’s birth and became its most illustrious customer. White carnation is at the heart of this fragrance and is the source of its dichotomy. Symbol of true love under the monarchy, the flower embodied the fire of French Revolution..." With pink pepper, mandarin, carnation, orchid, iris, rose, clove, rice powder, white musk, honey and woods.

Rêve d'Ossian ~ "Ossianizm is romantic poetry style in Europe in the XIX century. Ossian is the narrator and purported author of a cycle of celtic and epic poems. Ossian was influential in the development of the romantic movement at the end of the XVIIIth and the XIXth century.."Rêve d'Ossian" is a perfect perfume for those who claim a difference and the rich heritage of the History. Dark and precious essences, wooden notes filled with the mystery of the forest with fairies and pixies..." With frankincense, pine, cinnamon, benzoin, tonka bean, opopanax, tolu balm, sandalwood, leather, labdanum, amber and musks.

Relique d’Amour ~ "The smell of an old chapel of Cistercian abbey. Cold stone walls covered with damp moss. Waxed wood of altar and old pews ornate with carvings. Linseed oil in lamps. Incense and myrrh discernible in the air. But how fresh and spicy the smell of white royal lilies on this background! Subtle floral scent with green accents of leaves and powdery touches of yellow pollen. The beam of light breaks through the stained glass and illuminates this olfactory tumult of feelings varying from exaltation to humility and back. The silence which creates a sense of the divine call." With herbs, pine, powdery notes, lily, pepper, oak, incense, myrrh, elemi, musk, moss and waxed wood.

Jardins d'Armide ~ "Les Jardins d'Armide was the symbol of beauty, lush and beautiful, full of fragrant flowers and the rarest species. The beautiful gardens were long mythical, but the success of the Renaissance myth of Armida gave back a new impetus to these imaginary incomparable gardens. The Great Century French did not escape the myths, who is as passionate about the illusion and enchanting. Armide, the most emblematic of the seventeenth century magician, a woman of great beauty and knows the art of seduction, best embodies the ambivalent powers of charm..." With rose, orange blossom, iris, violet, glycine, carnation, honey, almond, tonka and musk.

Horizon ~ "After World War I, the Roaring Twenties reflect the desire of the exotic and the need also through fashion and decoration. The East and particularly Asia, provide new HORIZONS. The frenzy for exotic travel and encourages artists to transcend the culture of the East in their creations: new silk, fine embroidery, pearl beads, woody scents, heady and sweet ... In the euphoria of the Roaring Twenties, the female body is revealed, it abolished the corset, the flappers open the eyes and smoking languidly. Slumming it in the salons of Paris! The materials, colors, shapes symbolize a new freedom and portend, at the dawn of the Roaring Twenties, the hope of a new HORIZON..." With bitter orange, tangerine confit, rose, cognac amber, tobacco leaves, cocoa roasted almonds, oak, patchouli, benzoin, amber, peat, tobacco, vanilla, honey and soft Leather.

Déjà le Printemps ~ "A promenade in Nature, awakening after a long winter sleep. Beads of morning dew glisten on clovers and wild grass, which exhale fresh and green scents. The sun rises on the horizon and beats down wet flowers and new born fig leaves. Fresh foliage scrunches under the wind, buds bloom at last and the soil smells of turf and twisted roots..." With mint, orange blossom, daisy, fig leaves, clover, grass, muguet, galbanum, musk, vetiver, cedar and moss.

The Oriza L Legrand fragrances can be found now at First in Fragrance in Germany, €120 for 100 ml.