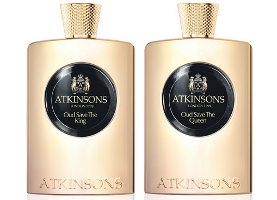 British perfume house Atkinsons has launched two new fragrances: Oud Save the King and Oud Save the Queen. The duo was inspired by the 1920s love story between the Crown Prince of Egypt, Mohammed Ali Ibrahim and Hollywood actress Mabel Normand.