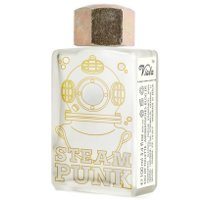 In the beginning was ... the word: Steampunk. Erik Kormann was browsing through the internet and was fascinated by this movement, which has evolved from a literary phenomenon to a modern subculture. A kind of retro-futurism expressed through the love of art and of the Victorian era and has its roots in the works of Jules Verne and HG Wells. Thus, a diving bell is also the symbol that the graphic artist Jo Zarth transposed for Erik Kormann: A tribute to Verne's novel "20,000 Leagues Under the Sea."

Erik Kormann always wanted to create a fragrance with Atlas cedarwood - and one that is reminiscent of an old library with wood paneling that evokes wanderlust. This desire fitted perfectly to the steampunk theme which also abounds with explorers and adventurers. So all said and done: the idea was born and immediately implemented.

Erik Kormann Steampunk can be found now at First in Fragrance in Germany, in 100 ml Eau de Parfum.