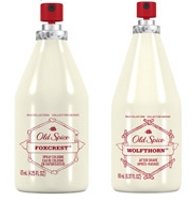 Foxcrest ~ "Smell is a strange thing, unless it is the smell of Old Spice Foxcrest, in which case it is the exact opposite of strange. In fact, it is so opposite that its scent is often used to place onto a man’s body. This body then becomes irresistible to the woman, and they wind up slow-dancing with each other to slow jazz music. That is how opposite of strange it is."

Wolfthorn ~ "Wolfthorn is a lady’s best friend because it makes her daydream about lazy mornings on a veranda and then night-dream of dangerous romances with perfect strangers that only speak foreign languages. This makes Wolfthorn also a man’s best friend because even if he is a stranger who only speaks a foreign language, his handsome smell will overcome all communication barriers."