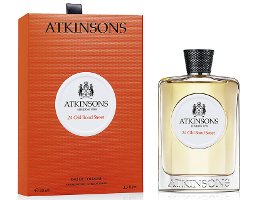 British brand Atkinsons, originally established in 1799, has been repackaged and relaunched with five fragrances based on scents in the archives: 24 Old Bond Street, The British Bouquet, The Odd Fellow's Bouquet, Fashion Decree and The Nuptial Bouquet.

24 Old Bond Street (shown) ~ "The emblematic fragrance of the house, 24 Old Bond Street is an extremely English cologne of tremendous personality. Its devastatingly aromatic cocktail of juniper, rose and black tea is deepened with a gorgeously eccentric note of smoky, oak casked whisky. Bracingly fresh yet warmly embracing, it is the definitive last word in English elegance." Available in 50 and 100 ml Eau de Cologne and in matching bath, body and home fragrance products.

The British Bouquet ~ "For ladies and dandies, a veritable mist of the Isles inspired by Beau Brummel, intrepid pioneer of the 3-piece suit, and the model of the man who was born with a wise-crack on his lips and an eye for knock-out sartorial elegance. Woven from velvety lavender, myrtle and malt, and lined with gilded citrus top notes of bitter orange and caviar lemon, The British Bouquet is impeccably finished with a leather accord that recalls the champagne-polished Hessian boots of the Dandy himself." In 100 ml Eau de Toilette.

The Odd Fellow's Bouquet ~ "Lawrence of Arabia ensconced in the splendour and leather Chesterfielded comfort of a St. James gentleman’s club, its weighty silence broken only by the occasional turning of a sheet of a newspaper, and the Oriental fragrance of Ottoman tobacco issuing from the depths of fearsomely upholstered winged armchairs… This rarified ambience is conveyed with almondy heliotrope flowers and dark tobacco, heightened with ginger and fiery peppercorn and, finally, deepened with a rich ambery accord of benzoin and labdanum. A fragrance of immense leisure." In 100 ml Eau de Toilette.

Fashion Decree ~ "A mesmerising re-creation of the fragrance that seduced the most dazzling fashionistas of the late 19th-century, among them, Sarah Bernhardt. Fashion Decree summons up a time when precious silk brocades, arriving from the Far East in trunks packed with patchouli leaves, were all the rage at the court of Queen Victoria. An opulent patchouli perfume of far-flung origins. A fragrance for exquisitely dressed women with a passion for luxury." In 100 ml Eau de Toilette.

The Nuptial Bouquet ~ "A fragrance of royal romance, a retro contemporary interpretation of Queen Victoria’s bridal bouquet: the green and white loveliness of Lily of the Valley, violet leaves and exquisite myrtle flowers enhanced with delicate white musk and sandalwood. For women who wouldn’t dream of settling for less than a prince." In 100 ml Eau de Toilette.

Atkinsons 24 Old Bond Street, The British Bouquet, The Odd Fellow's Bouquet, Fashion Decree and The Nuptial Bouquet can be found now at Harrods in the UK, £60-95.