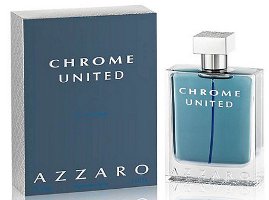 Azzaro has launched Chrome United, a new fragrance for men. Chrome United is a flanker to 1996's Chrome, and is intended as a tribute to male friendships.

Chrome United has a woody freshness which is inspired by a summers day. The fragrance has key notes of bergamot, cedarwood and musk which make it a sophisticated fragrance.