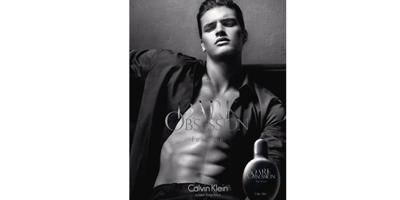 Maybe it’s because I have a stomach ache as I write this, but reading the ingredients of Calvin Klein Dark Obsession makes me queasy. There’s unripe mandarin, super-caffeinated guarana, green, sticky absinthe, herb-y sage, fir balsam!, vanilla and vetiver, labdanum and suede. I need to burp. A dark obsession should sound better than this, shouldn’t it?

On skin, Dark Obsession is even worse than “on paper”; it smells like women’s hairspray from the 1980s — cheap, harsh, and loaded with synthetic aroma-chemicals. How to describe such stuff as nightmares are made on* (forgive me, Shakespeare). I have a scent memory of my little sister, a true slob as a child: she is playing with her dolls, and scents as varied as plastic, soda pop, waxy “chocolate” lip gloss from the Dollar Store, and bundles of artificially-flavored “spaghetti” licorice come to mind (this licorice was often wrapped around my sister’s fingers and wrists like jewelry, staining her skin pink, while awaiting de-tangling; she seemed to always have a strand of this candy dangling from her mouth). Oh, and there’s the scents of Pucker “Puck-Puck” Bud, our Lab, who sat at my sister’s side, licking (or chewing) her doll-babies -- when he wasn’t eating licorice himself. The dry-down of Dark Obsession smells like Bud’s dog shampoo: a mix of penny lollipops and a barbershop — its air hazy with discount talcum powder.

Dark Obsession is a mess. The only good thing I can say about it is that it smells better from far away than up close.

Whoever runs the Calvin Klein men’s perfume division has obsessions alright, but they must be centered on the half-naked men in the perfume advertisements. I’m getting tired of the same old dark photography, the six packs, shaved chests…the serious expressions (the models seem to be thinking “If I frown or look worried or mean, I’ll be mysterious and sexy!” Wrong!) The Calvin Klein men’s fragrances franchise has a dated, “vacant,” and worse still, inexpensive, vibe; it needs a jolt, a new aesthetic — in the ads and especially inside the bottles. Bring on the sunshine, “happiness,” a smile or two — and, most importantly, high-quality juice.

*Our revels now are ended. These our actors/As I foretold you, were all spirits, and Are melted into air, into thin air;/And, like the baseless fabric of this vision/The cloud-capped towers, the gorgeous palaces/The solemn temples, the great globe itself/Yea, all which it inherit, shall dissolve;/And, like this insubstantial pageant faded/Leave not a rack behind. We are such stuff/As dreams are made on, and our little life/Is rounded with a sleep.
— The Tempest, IV.i.148–158.