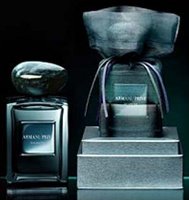 Nuances was inspired by an Armani fabric design, which has been used to create an organza pouch for the packaging. The notes feature orris, bergamot, cinnamon, heliotrope, vetiver and sandalwood.

Armani Privé Nuances will launch in May, in 100 ml Eau de Parfum; 1000 bottles were made.