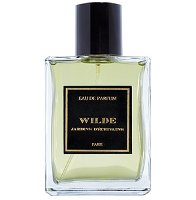 Jardins D'Ecrivains took inspiration from Oscar Wilde's famous aphorisms to express an olfactive figure of speech. Words, like fragrances, have the power to reveal reality.