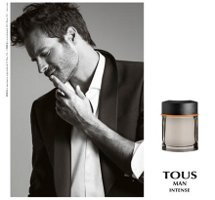 Tous Man Intense is a decidedly masculine fragrance which belongs to the Fougère-Aromatic family. Sage is the main component of TOUS Man Intense. This wild herb intensifies the presence of the rest of the olfactive notes. Envigorizing and aromatic sage brings character to the fragrance.

“It smells of the night, of mystery. I like the fragrance because it takes you on a voyage, it is very cool” confirms David Miller.