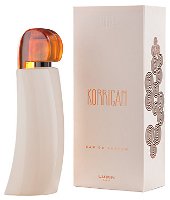 Korrigan (shown) ~ "Perfumer Thomas Fontaine imagined a tree for Lubin, to be called “Caramel Wood”. Its sap would be sweet like English toffee, but with tangy accents of wild apple, juniper and saffron, to answer for some of its mystery. He wanted a note of leather yet appetising, smooth like a whisky cream liqueur, yet smoky, fragrant and slightly bitter like superb pure malt. The story of Korrigan: A Korrigan is a small mythical creature that haunts the moors of Brittany, Ireland, Scotland and Wales, whisking us away to the folklore and legends of Celtic civilisation..." Additional notes include cognac, lavender, ambrette, cedar, oud, vetiver and musk.

Galaad ~ "[Perfumer] Delphine Thierry, who created Galaad, invites us to a tranquil morning ride in the mountains of the Middle East, when the scents of myrrh bushes blend with cypress resins and the woody fragrance of cedars. The leather of saddle and gloves gently warm up in the first rays of sun, while the little Arab horse snorts amidst the morning dew that has settled on Judean balsam trees and on the vines climbing along the mountain slopes of Galaad." Additional notes include cardamom, rosemary, honey, copahu balm, oud, cypriol and blond tobacco.

Akkad ~ "Akkad is a luminous amber perfume, mystical but also sensual. [Perfumer] Delphine Thierry, who composed this creation, imagined an amber note that is both spicy and luminous. The opposite therefore of the dark, mystical ambers that bring to mind the smoke of frankincense in ancient temples. Akkad amber opens with an aromatic citrus head note of mandarin and bergamot, enhanced by Clary sage. Clary sage, also known as “the sacred herb”, is renowned for its euphoric, harmonising properties." Additional notes include cardamom, elemi, frankincense, styrax, amber, vanilla and patchouli.

Lubin Korrigan, Galaad and Akkad can be found now at Aedes or Luckyscent, $180 for 100 ml Eau de Parfum.

(quotes via aedes and luckyscent)