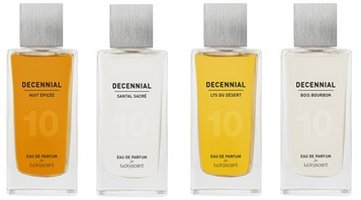 LuckyScent.com collaborated with two of the industry’s top perfumers – Andy Tauer and Jérome Epinette – to create this perfume passport to Los Angeles.

“Decennial truly captures our city of Los Angeles in all its energy, laid-back nature, diversity, complexity and controversy,” said Adam Eastwood, co-founder of LuckyScent.com. “Fragrance e-commerce began 10 years ago with LuckyScent.com, and we became the virtual Spice Road for the world’s most innovative and captivating scents. The journey continues…” said Franco Wright, co-founder of Luckyscent.com.

Nuit Épicée ~ "A nod to the obscure and sophisticated nightlife hidden throughout Los Angeles’ mysterious and hidden back streets. Nuit Épicée plunges its wearer into a dark paneled room of velvety, oud-like woods and spice, subtly sweetened with praline and almond and warmed with an ambery-vanillic base. Jeans, black tie and everything in between…or nothing at all." By perfumer Jérome Epinette, with almond, cumin, rhubarb, cistus, violet, blond woods, black amber and praline.

Lys de Desert ~ "An ode to what spawned Los Angeles – the rugged yet delicate, unforgiving yet captivating desert – is captured in Lys de Desert. Perfumer Andy Tauer combines this special, creamy botanical with the warmth and dryness of the desert, a natural space that has fueled his olfactory imagination for years. By perfumer Andy Tauer, with bergamot, rose, green lily, dry cistrose, iris root, ambergris, dry cedar.

The Luckyscent Decennial collection fragrances are available in 75 ml Eau de Parfum, $150 each.

(via prweb, additional information via luckyscent)

*Disclaimer: Luckyscent is a long-time advertiser at Now Smell This.