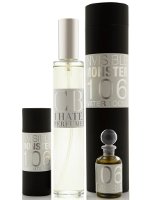 CB I Hate Perfume has launched #106 Invisible Monster, a new fragrance in the Secret History series:

An afternoon spent on the banks of the Susquehanna River in rural Pennsylvania is the inspiration behind the latest Secret History Scent – all of which signify an important memory in Christopher Brosius’ life. This moment comes from childhood, where a lazy day traveling on a boat near the river banks left Brosius feeling like one of his favorite TV characters on an adventure, Johnny Quest.

“I remember the boat slipping slowly down the channel between the islands. I was perhaps eight. The feathery fronds of the sumac trees and the wild vines overhanging the water made it easy to imagine we were deep in the jungle and we prepared ourselves at every moment for attacks by dinosaurs, wild animals or hostile natives. Villains wielding machine guns and lasers might spring from the underbrush on high-tech hovercraft only to be repelled by our own incredible technology.

I thought often of Jonny when I was a child. I longed to share his adventures through exotic lands and always in my mind, I did. By living always in a fabulous imaginary world, I became a rather distant child. In the real one, I took to wearing black turtlenecks on every possible occasion and I yearned for my Hadji. I was certain I would be a famous scientist like his father when I was grown. I would jet around the globe constantly exploring.”

[...] INVISIBLE MONSTER is the scent of a rare Chinese orchid with a brisk lemony perfume balanced against a green jungle riverbank. Some of its notes include: Sumac, Vetivert, Oakmoss and other specially-designed accords that capture the smell of the islands in the Susquehanna River.