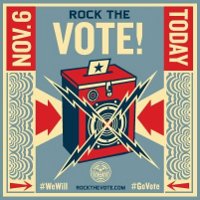 For those of you in the US, a quick reminder: vote! If you've already voted, I'd love to hear how long the lines were in your area.

Regardless, tell us your scent of the day. I'm wearing Providence Perfume Co Moss Gown, and planning to head to the polls in about an hour or so.

As always, no partisan or issue-based comments, please.