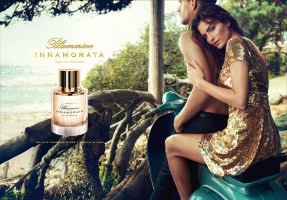 When I passed through Nordstrom last week looking for a fragrance to review, I sprayed on some Blumarine Innamorata and liked its peppery freshness chased by warm, chewy benzoin. A decent department store perfume! I snagged a sample and emailed Robin that I wanted to review it.

Four wearings later, and I don’t know what possessed me. To me, Innamorata is the sort of perfume that inspires others to say they don’t like fragrance. It’s the perfume that leaves you mystified: how did a company presumably aiming to launch a money-making fragrance choose something neither sophisticated nor easy to love? Worse, it’s the perfume that mimics bees loose in your skull, trying to escape through your nasal passages.

It’s my own fault for choosing Innamorata to review, and I don’t want you to suffer through another thumbs-down post without getting a little something out of it. So, not only will this review examine Innamorata, we’ll also look at what makes a fragrance annoying. I hope you’ll comment with your own thoughts on what defines an annoying perfume.

Innamorata was developed by perfumers Sophie Labbé and Olivier Polge. Innamorata’s notes include bergamot, mandarin, passion fruit, ylang ylang, magnolia, frangipane, grapefruit flower, benzoin and musk. Blumarine classifies the fragrance as a floriental and says it is designed to “capture the magic moment of falling in love.”

I find one of the hallmarks of an annoying fragrance to be that it leans too heavily on its upper register. Do you know what I mean? It feels like all piercing violins and no bass. Innamorata is shrilly aldehydic without the juicy citrus to give the top body, despite the bergamot, mandarin and grapefruit flower listed in its notes. Its weak floral body doesn’t balance its hot, wheezy kick-off. Innamorata burns instead of sings.

Innamorata’s high notes persist as it wears. Soon they’re joined by clean musk and an ozonic note, giving it a bit of a shampoo-fresh smell. Benzoin warms up the composition, but it still smells a bit like when I wash lingerie by hand and add a sample vial of perfume to the laundry soap.

Another aspect of a fragrance that makes it annoying is when it doesn’t meld somehow with its wearer. I think a perfume that succeeds connects with the person wearing it by extending from the smell of her skin or from her character and style. Innamorata sits on my skin like a cheap dress. The color and fit are all wrong. As with well-chosen clothing, a good perfume doesn’t draw attention to itself, but to its wearer. It’s only with attention that someone in your company can pull the thread of your fragrance from your entire presence. Not so with me and Innamorata. It has that dreaded “perfumey” quality. The thing is, I’m not quite sure who Innamorata would fit well.

Finally — and I know most people won’t care about this at all— a good perfume doesn’t try to pass itself off as capturing something as ridiculous as “the moment of falling in love.” Come on. Give me a break. I fall in love constantly, and it has never smelled like Innamorata. (Heck, I fell in love just the morning before last with the furnace installer who rushed to the door asking if I was warm enough. Who wouldn’t love someone who wanted you toasty? That moment smelled of wet cold, heating oil and fresh coffee.)

All this said, Innamorata may sell like hotcakes. Who knows? Enough perfume buyers are swayed more by advertising than by the actual smell of the fragrance to be talked into taking home a bottle. It’s not that Innamorata is awful. It’s just mediocre, and mediocre can quickly become irritating. I have to think that rather than true love, Innamorata will only prove to be infatuation. For me at least, Innamorata would be impossible to live with in the long run. 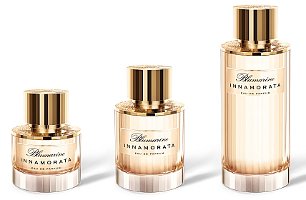