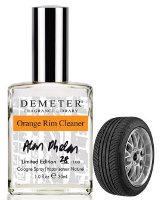 In 2009 Irish artist Alan Phelan contacted Demeter about creating a fragrance for an upcoming retrospective at the Irish Museum of Modern [Art]. Alan wanted to re-create the smell of an orange scented wheel de-greaser that was used by modified car enthusiasts at an event he had organized a few years prior. The smell of this cleaner was his strongest memory of the day, where modified car owners cleaned their parked cars all day prior to judging in a "Shine and Show" competition.

Rather than show photographs or make some kind of 'boy racer' artwork, the memory trigger through fragrance was how Phelan wanted to represent the idea. As an art piece the scent grapples with the o-object, as ultimate dematerialized artwork, an unobtainable object of desire, a smell. And thus, an amazing partnership with Demeter was forged, as the opportunity to merge the perfumer's art into the visual and spatial art of Alan Phelan was irresistible. Demeter was uniquely suited for this project because no other fragrance house works the relationship between scent and memory so intimately.

The project is connected to a multiple venue exhibition called "Fragile Absolutes" which worked through a range of different themes and productions methods.

Demeter Orange Rim Cleaner is available in limited quantities at the Demeter website, $30 for 30 ml.