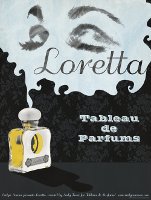 Tableau de Parfums, a collaboration between Andy Tauer of Tauer Perfumes and filmmaker Brian Pera, will continue their Woman's Picture series this month with the launch of Loretta, a rich floriental inspired by the short film of the same name:

Like the film, Loretta the fragrance explores the way fantasy and reality inform each other in an interplay of light and dark impulses and energies. In the film, the character of Loretta, played by Amy LaVere, deals with a difficult, mysterious past by transforming it into a dream world of possibility and romantic adventure. The balance between the past and her fantastic reinvention of it is delicate, fraught with tensions, where childlike naivete and adult awareness twist and curl into increasingly complex sensual patterns. Fragrance becomes an important gateway into this transformed world.

Tableau de Parfums Loretta will be available in 50 ml Eau de Parfum, packaged with DVD and film poster ($160) or in a 7 ml Travel spray ($40). It will be introduced at Luckyscent’s Scent Bar in Los Angeles on 10/19.