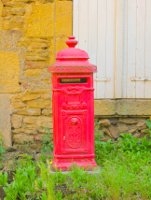 This week Elena wants us to help her find something more complex and rich than what she usually wears, but something she can still wear frequently — not a special occasion perfume. She has no set limit on the price, but she'd prefer to find something under $200. Here is what we know about Elena:

She's in her early 30s, and lives in the Massachusetts suburbs with her young daughter, husband, and two greyhounds, one of whom tries to clean any perfume or lotion off of her immediately.

She says she is a very nerdy, bookish jock.

She plays tennis and Ultimate frisbee, loves taking her dogs and daughter for long walks, and also loves to read.

She describes herself as outgoing and friendly, analytical and intelligent, goofy and playful.

Elena loves leather, iris, and green fragrances, but says she doesn't know many notes — this is just what she has figured out so far. Fragrance favorites include Hermès Un Jardin en Méditerranée & Un Jardin après la Mousson (though it verges on too gingery to her lately), Guerlain Mandarine Basilic (for playing tennis or hot weather), Tom Ford Violet Blonde (very animalic/cumin-y on her, and sexy). She also has a bottle of Bvlgari Black, but it seems "too much" and tends to languish unused. She used to wear Chanel Coco Mademoiselle, but would like something less popular.

Elena dislikes Christian Dior Poison, and thought Thierry Mugler Womanity was interesting but definitely not for her. She would probably prefer something that isn't too sweet or too strong.

Chanel Coco: she likes it, but it's too sweet.

Chanel Cuir de Russie: gorgeous, but she feels too young for it.

Guerlain Mitsouko: she liked the dry down, but not the peach.

Guerlain L'Heure Bleue: she sort of liked it, but not the anise.

Diptyque L'Ombre dans L'Eau: she's been wearing a sample, and loves the tomato leaf opening and the rose that smells like it's outside.

Update ~ a few more that I inadvertently left off the list, sorry!

Bottega Veneta: she liked it because it was easy to wear, but it didn't make her swoon.

Robert Piguet Bandit: she liked it but it is difficult to wear.

L'Artisan Mure et Musc: it was too sharp; she didn't like it.