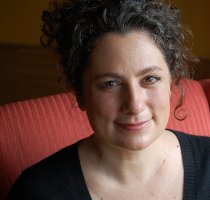 Note: the following is an excerpt from Alyssa Harad's (yes, our Alyssa!) just-published Coming to My Senses: A Story of Perfume, Pleasure, and an Unlikely Bride. Tomorrow, join us again for a Q&A with Alyssa about her new book.

Andy Warhol, who knew a thing or two about perfume and cool (a serious devotee, he was buried clutching a bottle of Estee Lauder's Beautiful), wrote that perfume is another great way to take up space. Nobody knows this better than adolescents, even if they generally all want to take up exactly the same kind of space.

Perhaps you remember clouds of Alyssa Ashley and Drakkar Noir, or Anais Anais and CK One. In my junior high, Ralph Lauren reigned supreme. The boys--the right boys--wore Polo, splashing it on with abandon from the handsome hunter-green bottles they kept in their lockers. Their female counterparts patrolled the halls in clouds of the original Lauren, passing that deep-red square bottle from girl to girl until all were fully anointed.

Polo was a swoon-worthy scent of deep, smoky-sweet woods and gentlemanly confidence, good even when broadcast at very high volume. A few years later I would fall successfully in love with a wonderfully off-kilter boy who wore it very well. But the real object of my desire was Lauren. It opened with the rusty-spicy green of marigolds and then rounded ever so slightly into wide, wax-polished planks of wood floors, clean hair, and cut-roses chilled by the florist's case. Now sadly attenuated, it was a scent like the clear tone of a bell, with no hint of dirt, sex or decay.

But though I can still identify it from twenty paces, I never wore it. I was not among the girls in the hallway waiting for their turn at the red bottle. I was in the basement eating lunch in the art room with my friends, as I did every day for three years. We spent hours discussing the shifting power structures of the school--how had moved up or down, who was hanging on by a thread and who had been cut off for good. It seems impossible, but I dimly recall our making an actual map one sleepless slumber-party night--a star-stickered poster-board flowchart of the teen court.

So I wore the perfume my grandmother gave me. At least I think it was for me. It came tucked into the packages she sent us--little vials gleaned form the beauty counters of the department store where she worked. Once there was a whole mini-bottle of Bal a Versailles EDC, which I tried and failed to wear for years. (And no wonder. Bal a Versailles EDP is famously rich and dirty--huge overblown roses, rotting cherries smoked with incense and mellow aged manure. The eau de cologne is just plain dirty and is best worn by very wicked old women.)

I settled instead on Oscar de la Renta's eponymous perfume, a blowsy floral oriental that required twenty years, two bra sizes and an evening gown more than I had at my disposal to be worn properly. It went on strong and then bloomed bigger into a thick sweatiness that set my teeth on edge. I gritted them and wore it anyway, the tuberose of my resistance, sniffing past it to catch a whiff of the Lauren that teased me every time I walked from my locker to class.