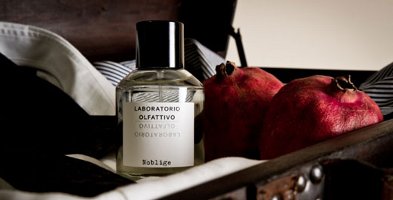 Noblige (shown) ~ Developed by perfumer Marie Duchêne. "Noblige stands for noblesse oblige, the uncommon that puts you under its spell. A citrus cloud enlightened thanks to the junction between powdery notes and precious elements that melt into the floral and sophisticated heart: ambrette seeds, iris and lavender with ethereal neroli. An accurate elegance, whispered and understated. The white light and infinity. The research of an unreal perfection. All this has a name: Noblige." Notes include bergamot, citrus, lavender, iris, neroli, ambrette, vanilla, tonka bean and white musk.

Décou-Vert ~ Developed by perfumer David Maruitte. "Décou-Vert is born to fulfill the goal to combine three different types of fragrances, often considered at odds: flowery notes, those genuinely vegetable notes and the so-called “greens”. A blank canvas lifts us to a brand new experience, in which we could feel the colours and perceive a hint of a sultry magnolia carried by the rustle of green leaves and we were enormously amazed when we realized how the unusual combination led to an aquatic scent. A true discovery: Décou-Vert." Notes include lily of the valley, green leaves, lilac, jasmine, magnolia, musk and woods.

Esvedra ~ launched in 2011. Developed by perfumer Pierre Guillaume. "Es Vedra an island set in the Mediterranean, from the magnetic charm and full of contrasts. The legend wants that the island is the rest of the mythical Atlantide or the island of the Sirens of Homeric memory. Very beautiful and suggestive for her wild aspect, fragmented by sour rocks that are contrasted to a spontaneous vegetation, the magnetism and the nature of this island have inspired Pierre Guillaume in the creation of Esvedra, a new vision of the vetyver." Notes include névénolide, vetiver, musk, petitgrain and coriander.